Showing posts from April, 2004
Show all 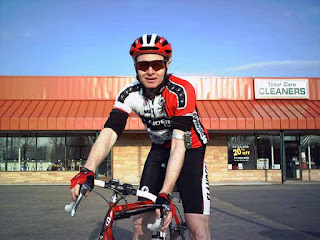 I got off work two hours early to battle the wind on the road...I won. It slowed me some but I had a blast. I even rode with a 60 year old guy, Cleve Pederson, from Minneapolis who was surprisingly strong. He rides around 11,000 per year which is remarkable when you consider our climate for half the year. I headed south on hwy3 and took that to Fairbault. It was very slow going with the winds at times gusting close to 30mph. I turned around with an average speed of 14.5mph. I turned and headed for home the same way I came. I was flying! I ran my speed up to 35mph at times in the flats and would hold that for half-mile stretches then would back off to about 27 mph, then hit it again. Still, the wind had taken its toll on me and as usual, you never gain as much from it as it takes from you. The day was much like the day 3 years ago when I rode past the turkey farm and hit the dog at around 38 mph. I rode by there today and thought I'd try and put out the same speed as I went by but
Post a Comment
Read more

I took yesterday off work. I needed a break. I went for a two-hour ride in the morning and took Rachel to the Mall of America in the afternoon to kick around for a bit. She enjoys going places with me and I feel so blessed that she still sees me as 'okay' to be with. She's nearly 13. She's such a good kid but try telling that to her dad. Actually, I did tell him that last weekend. He was riding her about how she seldom calls him and she was feeling bad about it. In reality, he's the one who could be spending more time with her but doesn't. When she goes to see him on the weekend she says they don't do anything. She watches tv mostly and he doesn't engage her in conversation. In a phone call to her last weekend, he mentioned that maybe he should ground her for not calling him. Yea, that's going to make her respect you. She says it wouldn't matter because she doesn't leave the apartment anyway so it's just like being grounded. As it turne
Post a Comment
Read more
More posts