Showing posts from February, 2017
Show all

She's Been Activated and I've Been a Bad Boy 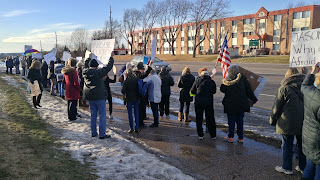 I attended my first ever protest last week in front of the Burnsville office of 2nd district Congressman Jason Lewis to draw attention to his reluctance to hold a town hall meeting with his constituents so people can voice their concerns and yes, vent some anger. Between protesting Wells Fargo's support of the Dakota Access Pipeline, the pipeline itself, and the Woman's March in January, Tammy has been walking the walk and showing up at these protests with her signs, not content to only voice her concerns on social media and leave it at that. She's been activated. I went along with her to get a feel for what's happening at the grassroots level. I see more of this in my future as well. We also attended a meeting at a friend's home last week to view 13th , a documentary on Netflix about the history of mass incarceration of African Americans in the US. The documentary delves into post Civil War racist legislation that in effect kept many African Americans from truly
Post a Comment
Read more

Zwift, A Slippery Solution and Reaching Out 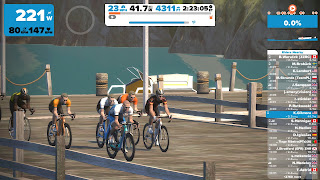 I've pretty much given up hope for getting back on my fat-bike for the rest of the snow season due to the amount of ice on the trails. I can't recall a winter anything like this in the 5 years I've been trail riding. I'm disappointed because I had hoped for getting in lots of snowy miles this winter but such is life. All is not lost though because I'm actually getting in some excellent workouts on my CompuTrainer and enjoying the thrashing I receive on it more than ever now that I'm using the online program Zwift. It's both fun and effective at improving my performance. Check this out—this is from a recent ride I did. The video looks a little sparse of riders but there were actually about one thousand others on the course with me. Typically, there's never any lack of other riders to try and keep up with or ride off your wheel if that's what you're looking for, and I do enjoy that. There are also some structured "workout mode" f
Post a Comment
Read more

There Will Be No Step 5 For Me 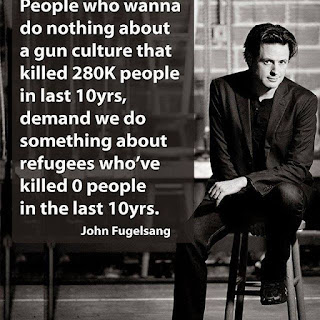 For a few weeks after Trump's* election, I'd have fleeting moments where it felt like I was about to wake up from a disturbing dream and all would be well—he wouldn't actually be poised to be our next president. Whew! What a relief! We really dodged a bullet there! But I'm still here and this really bad dream continues. It's one thing for me to grasp that Trump* is our president and that many of you voted for him but it's a whole other thing to come to terms with so many among us who are still not flinching or voicing any reservations about his opening foreign policy blunder with his ban on Muslims immigrating to the U.S. and in particular his ban on refugees. I can't get my head around that and I won't even try because to do that would be to admit that there could be a valid reason to the hyped-up fear that so many are too willing to accept. John Fugelsang said it best in the meme to the left. When I think about Syrian refugees I try and imagine t
2 comments
Read more
More posts