Showing posts from October, 2015
Show all

It's rainy, windy and cool outside. A perfect day to put my feet up and sit by the fireplace in the sunporch and do very little. I'm taking care of Elaine while Tammy is out running errands. There's so much activity at our bird feeder forcing some go-arounds as there's no place to land. Elaine enjoys watching them. I walked a little more than 11 miles yesterday beginning with a 1.5-mile walk with the pups. I can't think of any other activity I do that is more relaxing. I've got nearly 60 Frontline episodes stored on my Nano which will oftentimes accompany me when I'm out there but sometimes I'll opt for quieting my mind instead and try and think of nothing at all, which is actually much harder than you might imagine. It takes practice. I've got my Shaman in the shop at Freewheel Bikes in Minneapolis having some work done so it's ready for cold weather riding. There's an upgrade kit for the RockShox front suspension that allows them to
Post a Comment
Read more 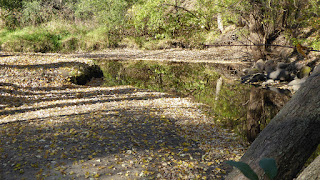 I got up Saturday morning and drove to Bloomington to take some photos at Moir Park. It's a park a little more than 2 miles from where I grew up and one that I'd only been to one other time that I can recall and that was probably 45 years ago. I was talking with a friend about it on Facebook and it piqued my interest to go back and have another look. The one memory I have from that visit all those years ago was descending some concrete steps and how they led to a park that was so unlike the world above. The park was and still is a tranquil setting with a creek (Nine Mile Creek) running through it. I'm surprised we'd never gone there as a family for an afternoon picnic when I was a boy. When we finished our basement 11 years ago we purchased a Simpson's Pinball Party pinball machine with the idea that Rachel and her friends would have a blast with it. It didn't quite turn out that way though because pinball seems to be something that's of little interes
Post a Comment
Read more

Routines But Not Structure

Tammy's cousin Barb runs a non-profit that helps disabled adults plug into society in various ways. One of the ways is through a program of socializing with others while making crafts. Tammy took on the role of leading that group a few months ago and I've recently joined her. There's a fair amount of preparation involved but working with the people and seeing the satisfaction they get from being creative makes it all worthwhile. The group consists of people in Barb's program and adults at an assisted living facility where we set up shop once each week. Yesterday's project brought out a lot of smiles when people saw what they'd be making: a scarecrow and a Frankenstein on a stick. Trying to get everyone through the project can get a little hectic because not everyone arrives at noon when we start. Some straggle in as late as a half-hour after we begin and we just work with them and fit them in as best we can. I'm getting more sleep now than at any point e
2 comments
Read more

A Costly Oops, The Face of UMR and Lending a Hand 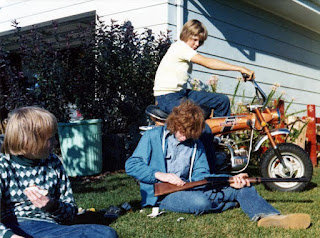 My life sorta-kinda feels like it's back to boring and I'm happy about that. I could do with an extended period of this. Facebook got very heavy and contentious last week after the school shooting in Oregon. So much so that it felt like the place to not be. Everywhere I looked there were heated arguments for and against gun control. I have my opinions but I got a strong sense that I wouldn't be changing anybody else's. The only gun I've ever owned was a Winchester 30-30 Model 94 that I got when I was around 15 years old. I purchased it so I could go deer hunting with my brother-in-law, Jerry. Truth be told, I never wanted to kill a deer. I only wanted to spend time with Jerry. I used to enjoy shooting it at the gun range the few times we went there. I can still recall the feeling I got pulling the trigger: the sound, the kick, and the smell of gunpowder. It was fun and I wouldn't want to deny that enjoyment to others. Nor do I think most reasonable people
Post a Comment
Read more
More posts