Showing posts from October, 2007
Show all 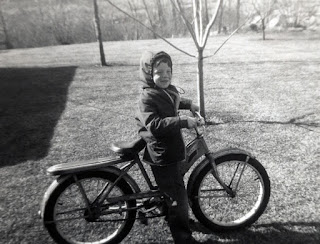 I was flipping through stations on the radio while driving to work a couple weeks ago. I paused on WCCO and listened as they filled some time chatting while leading up to the weather. Mike Lynch, the weather guy, was talking about his old neighborhood where he grew up in Richfield and about one of his neighbors there -- a beautiful girl several years older with the last name of Falen. The neighborhood he was talking about was my neighborhood, too, for one year in 1965. We lived next-door to Falens', and Mike lived on the other side of them and yes, the neighbor girl he was referring to was very pretty and I suppose in high school at the time. We rented a home there as my dad's job had our family moving back and forth between Minneapolis and Detroit several times in the span of as many years. We never seemed to stay anywhere very long and when we'd move back it would always be to a different neighborhood and school district. It was never fun being the new kid in class but
Post a Comment
Read more 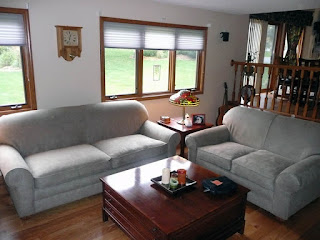 Tammy spent a good part of the last month reupholstering our sofa, love seat, and ottoman. I didn't realize how badly they needed to be redone but the sun had definitely taken its toll on them. She'd mentioned a while back that she'd like to do it and I know she's done that sort of thing before but to be honest, I wasn't sure she could pull it off. Was I wrong! We've got a microfiber material on our sofa in the basement and we're really impressed with its resilience. Tammy was able to find the same fabric in a different shade for this job. She did the ottoman first to practice her skills and make sure she wasn't getting in over her head. She had it done in a day. She began work on the love seat next and was careful to note how the fabric was spread across it. She took photos in case she got lost during the reupholstering phase. She never had to refer to them. She's a natural at this sort of thing. I joked with her that when we retire and open o
Post a Comment
Read more

A Phone Call from DC

I cut my ride short today as my legs were feeling tired. I was in the shower when I heard the phone ring. I figured it was Tammy on her way home from work but she'd have to wait as I was all soaped up. A few seconds later Tammy is in the bathroom telling me that John Kline  (our Congressman and neighbor) is on the phone. The soap will have to wait. I'd written John a few nights ago to express my frustration with FAA management and apparently he'd read my email. I routinely see him when I'm out walking Toby and Allie as he lives just down the street. I suppose I could have approached him and introduced myself then gone into the laundry list of complaints I have but that's not me. I outlined a brief description of my concerns then gave him a link to a recent post in my blog hoping he'd follow the link to learn more. He did. He said he supported Natca's (Air Traffic Controllers' union) attempts to require the FAA to enter into binding arbitration but tha
Post a Comment
Read more
More posts