Returning to Normal and Motion is Lotion 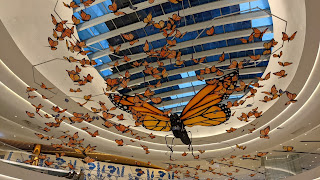 Tammy and I are fully vaccinated and beginning to make our way back into restaurants and other establishments that we either avoided or were closed for the past year due to the pandemic. We took so much for granted. We kicked around Mall of America twice this past week. The first night we went we didn't realize they were closing at 7:00 and that only gave us an hour so we went back on Friday night when they were open until 9:00 and we had more time. The mall looked about normal to me with only a smattering of closed stores. Facemasks are still a requirement here in Minnesota and there are now directional stickers on the floor of the mall that encourage people to walk in a more orderly way to help with social distancing.  I was out walking Charlie a couple of weeks ago on a chilly afternoon when I saw a butterfly in the grass. It seemed odd to see a butterfly so early in the season so when I got home I looked it up using Google Lens . I learned it's a Mourning Cloak and that it
Post a Comment
Read more

A Chance Encounter and a Verdict 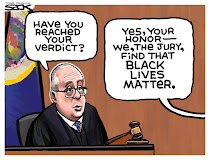 I had my 2nd jab of the Moderna vaccine last Wednesday. The side effects weren't bad but they were noticeable—mostly mild body aches and tiredness. It's nice to have the vaccine in me and to be doing my part, especially when so many others refuse to . I was in Davannis late Saturday afternoon enjoying a hot sandwich and a cold glass of water when a man and his 5-year-old son pulled up chairs at a table across from mine. The young boy was so adorable and I could tell he really thought the world of his father. Some time passed and the father glanced my way. I told him, "your boy is adorable". He thanked me and said his job as a trucker keeps him away several nights each week so he's sure to make time for his son during his days off. He had a thick Middle Eastern accent. He said he's from Persia and came to America when he was in his early 20s, nearly 30 years ago. I asked if his son speaks Farsi and he replied that he speaks a little. In less than two minutes of
Post a Comment
Read more

Spring has Sprung and When Trouble Comes 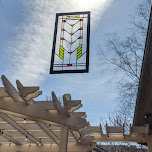 I spent the better part of a day recently going through my collection of stained glass and sorting it by colors while cleaning off the dust from pieces that haven't been handled in years. I threw away quite a lot as well—some opaques that I'll never use. I'm really liking the way I have it organized because if nothing else, we Virgos are all about organization. It's so much easier to find what I'm looking for. Now that my shop is as clean as it's been in a while, I think I'm done working in  my glass studio  until next winter. Spring has most definitely arrived and my focus has turned to outdoor interests. I managed to do this sun-catcher last week before turning out the lights. When I first began making my Frank Lloyd Wright-inspired sun-catchers 25+ years ago, this was the first design I came up with. I've replicated it numerous times over the years. I've been out on my Orbea mountain bike a few times in the past week. It's nice to finally ge
4 comments
Read more 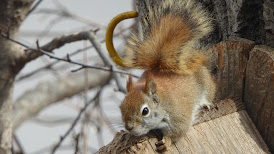 In the nearly 29 years I've lived in our home, and of the abundance of squirrels that have made and make our yard their home, I've never once seen a baby (or juvenile) squirrel among them until this past week. It's so adorable! I've been seeing it sunning itself on top of a feeder on the side of our house. Tammy commented that it seems lonely because it's always by itself, never interracting with other squirrels. I'm not sure what to make of it because the squirrels we have around us are all gray squirrels but this little one appears more red than gray. I suppose it's possible that it becomes more gray as it ages. How fun it would be to get it to take food from my hand but I don't see that happening. I'm content to observe it from behind a window on the side of our home.  There's an Instagram account I've been following called babygirlbabysquirrel . The owner of the account rescued a baby squirrel from another animal's mouth in September
Post a Comment
Read more 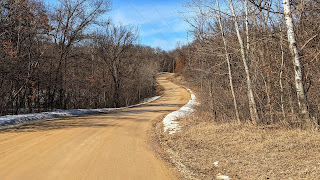 This week started out nicely. I took advantage of some unseasonably mild temps Monday afternoon for a 34-mile gravel ride to the southwest. My quads were a little sore from more miles than usual on my indoor trainer the previous week so I was hoping the ride would loosen them up a little. Later in the afternoon, in a matter of maybe 20 minutes, I began to feel weak and shaky. I had to lay down. Then I got the chills and couldn't warm up. I spent the evening shivering by our gas fireplace with a blanket over me. Except for a trip to GS Labs in Shakopee to a  drive-thru Covid testing site  the next day, I had no idea that I'd be on the couch or in bed until this morning (Friday). The testing site performed 2 nasal swab tests for current Covid infection and one finger prick antibody test to see if I've had any previous exposure to the virus in the past few months. They were all negative. My illness had all the makings of a bad seasonal flu but one that hit me harder than any
4 comments
Read more 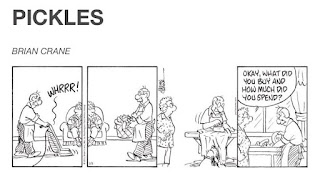 Until I bought my first fat bike a little more than 9 years ago, I'd been strictly a road cyclist my entire adult life. I'd been eyeing those strange beasts with their larger-than-life tires for about a year when I took a drive to Freewheel Bikes in Minneapolis one night to have a closer look. Steve offered me the keys to one to take out into the neighborhood to see what I thought. I was instantly hooked. I felt like a kid again on those fat, bouncy tires and I know I had to have been sporting the biggest smile.  Steve told me about the trails along the Minnesota River bottoms and how they'd be a good place to get a feel for my new bike. It was an area I was familiar with having literally run thousands of miles along Black Dog road in the shadow of the power plant's stack in my former life as a runner, but the trails themselves? They would be a new experience for me. The next day I excitedly took my Mukluk down to the river bottoms  via a stop at my mom's and Tim&
2 comments
Read more

Earth to Mars and in Need of a Haircut 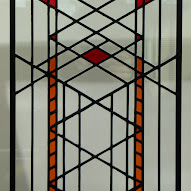 I finished work on the larger stained glass panel I mentioned in my last update. I'm pleased with how it turned out and I'm also pleased to have all of the windows in our sunroom once again mostly protected from bird strikes. Here's a link to more photos of the panel on my Instagram account where someone commented that I "must be a perfectionist." I replied that I am and that it's sort of a blessing and a curse. All of my life I've been someone who needs order to my surroundings. I don't do messes well. The lines in the stained glass panel work really well to satisfy that need in me. There's order in the chaos of those many lines. With the remaining weeks of winter, I hope to keep adding to my somewhat depleted inventory of sun-catchers in my Etsy shop  before turning my focus to more outdoor activities. We came out of our polar vortex deep-freeze that gripped much of the country a couple days ago. Our daytime highs are well above freezing and eat
Post a Comment
Read more
More posts