Showing posts from April, 2010
Show all

Trike Trials and Class 3 of 5

I ventured beyond the barriers of closed Blackdog Road the other day to see how much work remained before the road was open to traffic again. The Minnesota river is well within its banks now but the flooding has left behind tons of silty sand that is still being gathered up and taken away. As I negotiated the tricky surface on my bike, I noticed several nesting pairs of Canadian Geese just off the road's edge. They're fine for now as there's no traffic to speak of but once the road is reopened I'm not sure how they'll adapt. I got a phone call from my mother last week and listened as she excitedly told me about her plans to buy a trike for riding around her neighborhood. She's been having increasing difficulty doing her daily half hour walks (she'll be 82 in November) and thought that a trike would be a good way for her to be able to get some exercise. I too thought it was a great idea and one that I'd never considered. Without telling our mom, all s
Post a Comment
Read more

A Shocking Fix from Tires Plus 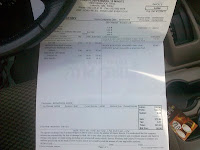 I went to Tires Plus in Lakeville last Friday morning to have the oil changed in my truck. While paying for it, the guy behind the counter mentioned that all four shocks were leaking and in need of replacement. He said that for a truck with as many miles as mine (97,000) it's not uncommon. I thought for a moment and told him that I was quite sure I'd had them replaced maybe two years ago. He said that can't be so because they looked to be original. Two thoughts were running through my head: the work I paid for two years earlier was never done or he's trying to sell me something I didn't need. I explained to Jimmy that I was sure I'd had the work done at his shop but he said he had already looked and there's no record of them having done it. My next thought was that I'd had the work done someplace else. Regardless, two years doesn't seem very long for shocks. I asked him if it was possible that I didn't get what I paid for. He assured me that an
8 comments
Read more

Damn the Torpedoes Full Speed Ahead 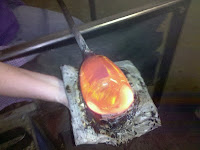 I'm too over-scheduled. I find relief in knowing that life should return to something resembling a more normal routine in another month. Until that time I'll focus on my unscheduled weekends. We're both excited about our glass blowing class. In our first lesson, we went over the different tools used in manipulating the glass and the proper way to move about the work area to minimize the risk of burns. We also learned some fundamental considerations when working with the molten glass. Something that became apparent once we sat at the bench and began to shape the glass was that nothing was as easy as our instructors made it look. There's a knack to everything. More to follow as we progress. I've been struggling with Hosanna's (our church) decision to leave the ELCA . Whether we remain a part of the ELCA is unimportant to me but what does concern me is why we're leaving. The ELCA recently voted to allow gay persons in a committed relationship to serve in l
1 comment
Read more

Happy Easter! I'm finished complaining about the winter of 2009/10. We got through the month of March with zero snow to account for it which left me with not such a bad taste in my mouth after all. Tammy and I are once again making trips to the dog park a regular part of our routine. We were dividing our time between Ritter Farms and Three Rivers/Cleary Lake but it appears Ritter has one big disadvantage working against it. Ticks. We took the pups there Thursday and later that night found that they were loaded with them. We're at 22 ticks and counting. I took a trip to the vet the next day and stocked up on Frontline. Frontline isn't a repellent nor does it get into your pet's bloodstream. The following is taken from their website: "FRONTLINE Top Spot and Plus spread over the pet's body by a process called translocation. When applied, these products are gradually dispersed by the pet's natural oils, collecting in the oil glands in the skin. It is the
1 comment
Read more
More posts