Showing posts from April, 2007
Show all 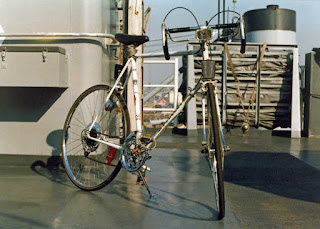 In 1977 I was living in San Diego, assigned to the USS Fresno working my way through a 4-year enlistment. I had a bottom bunk in OI berthing which opened up to stow my clothes and other stuff in addition to a stand-up locker which had even less room. Some of the guys would go together and rent apartments. These were usually the same guys who owned cars. I had neither. I lived a very meager existence. Much of what little I got in pay was sent home and put into a savings account which by the time my enlistment was over had grown to over $5000. I wasn't making much more than $8000 a year then so that was a lot for me to be able to stash away. I'd eventually find an outlet for my money. 30 years ago today I went to the Navy Exchange in San Diego and bought my first road bike...a white Peugeot for $155. I knew nothing about components, bike handling characteristics or sizing. All I knew was that it would give me independence in a way the buses in San Diego couldn't. I'd
2 comments
Read more

Random Thoughts on a Thursday 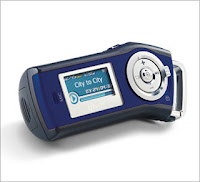 We've been taking Toby and Allie to a dog park about 10 miles from home. We live in the suburbs without a fenced yard so it's not easy to let them run around and explore. The dog park has acres of openness where we can walk along and not worry about them running out into traffic or getting lost. Here's a video I took from yesterday's walk. What surprised me most was how Allie's personality changed once taken off the leash at the park. When she's on the leash and we're out for a walk in our neighborhood she can be aggressive toward other dogs. Off the leash at the park, she's not at all aggressive. Toby is very non-confrontational toward other dogs. On our first visit to the park, he was reluctant to go near other packs of dogs. He's a submissive little guy who doesn't want any trouble. I replaced my mp3 player. My iRiver I bought three years ago still works fine but it's gotten crusty from sweat as I only use it when I'm out on my bike
Post a Comment
Read more

It Truly Is a Small World and Glory Revealed 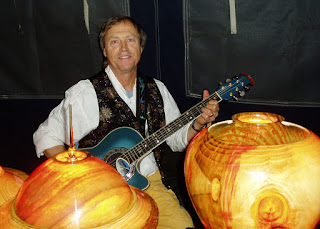 Okay, I've heard enough about Don Imus and Anna Nicole to last ten lifetimes. I'm much more concerned about what's happening to our honeybees—really. There have been a few stories recently about beekeepers going out to their hives to find them abandoned when just a short time earlier they'd been thriving. To most of us, honeybees are a nuisance but the reality is that without them we'd starve. I don't think it can be stated strongly enough what they mean to our existence. We don't usually think of ourselves as being dependent on something so small but the reality is that we are. Tammy and I made it to the American Craft Show in St Paul on Friday. It's a yearly thing we try to do although we don't always make it. They've got the best collection of glass artists you'll find and each year they seem to add more. Every time we go I get re-inspired to take the leap into glass blowing. My guess is that my glass blowing dream won't be realize
Post a Comment
Read more

Easter, Rachel in H-wood and Porta-potties 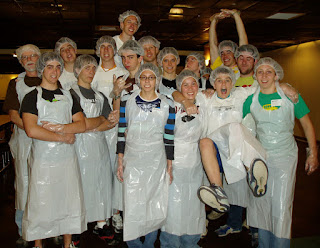 Hosanna acted out the Passion Play on Good Friday. It was a very moving service performed by some incredibly talented people from the church. It was interesting how it was done with several of the actors taking the stage by themselves and playing out their part in the hours leading up to Jesus' crucifixion. Jon Russell played the part of Peter, a man beside himself with grief at how he'd denied Christ not once but three times. When Jon finished his speaking part he picked up his guitar and began to play. He's so talented; not only him but the many others, too. Hosanna was buzzing all morning with four services before noon. Typically the music at Hosanna is much more contemporary than traditional. Today's service began with a traditional hymn which I'm sure appealed to many from out of town who've maybe never been to Hosanna or experienced our style of worship. It was nice but no sooner had the hymn ended when Jon cranked up the volume and the tempo and put the
Post a Comment
Read more
More posts