Showing posts from March, 2011
Show all

In Need of Redemption

If you've caught much of the news this week you've no doubt heard about the air traffic control supervisor who fell asleep in the control tower at Reagan National Airport in Washington DC.  I first learned of it when my cousin Deborah posted an article on my Facebook. I was certain the article was wrong when they stated that the lone controller involved was a supervisor. Since when do they work a midnight shift on their own I wondered. I've never heard of that. But sure enough, the article had it right. I would not want to be that person. I'm curious to see what sort of broad-brush the FAA responds with to ensure that this scenario never repeats itself. I don't typically watch Fox News very often because to me it's much less about the news than it is about propaganda and a right-wing agenda, but I do occasionally check in as I did a couple days ago. The host was talking about the sleeping controller and how in any other field a person with similar responsibili
4 comments
Read more

Tammy and I came back from church this morning to the sound of a robin singing in a tree in our front yard. I recognized its song and paused long enough to find the source. It's reassuring to know that this especially long winter is nearly over. Today is officially the first day of spring but it still looks a lot like winter out there. I never made it out on my bike this week like I figured I would but I'm fine with that. I'll be riding regularly soon enough. I did a tough 30 minutes on our Concept 2 rower Wednesday; maybe a little too tough. I was trying to beat my previous best of 7136 meters but came up 7 meters short. With my heart rate steady between 165-170 for the last 15 minutes, it's a punishing machine. We were back in the studio again on Thursday and Friday. We were both glad to have two days because neither of us was happy with our Thursday effort but that's the way this sort of thing can be. I was talking with a woman there who has been doing this f
2 comments
Read more 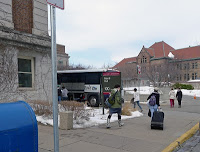 It's been over six weeks since I've been on my bike, either indoors or out. I got busy with a bunch of other things of no less importance that had taken a back seat to it for too long. But now I'm all caught up and ready to consider hitting the roads again this week. The break from my riding has been nice but I'm feeling the need. Rachel came home Thursday night. Just like old times, she occupied a place in front of the entertainment center in the basement while Tammy and I sat on the couch and listened to her tell about all that's going on in her life. I miss that. The funniest story was about a dollar party she'd attended. Everyone was required to bring something they could sell for a dollar (at least I think that was the deal). Anyway, she and her friends made jello-shots but without the alcohol. She said most of the kids were too drunk to notice that she and her friends were getting one over on them. Too funny—at least I thought it was. I drove her to th
Post a Comment
Read more 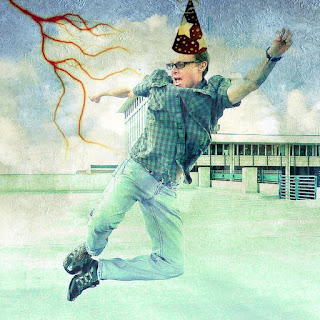 I have to give a quick mention to my brother Bryan (the oldest of us six siblings) for taking a photo of mine and turning it into something more. He uploaded it to Facebook where I immediately knew I had to have it for my new profile pic both there and here on my blog. A more realistic depiction of me I don't think exists. Back to my brother for a moment. I would love to have just a smidgen of his photography knowledge and ability. He's able to find a photo opportunity where most simply can't and he's also very good at enhancing photos to create a work of art beyond what was originally there. Rachel had no problems at all during her exposure to human cadavers at Mayo despite having had a greasy BBQ sandwich just prior to the viewing. She wrote an essay for her class about the experience and gave me the okay to post it here . The stained glass project for our basement entertainment center is now complete. It was a little over two years ago when I finalized a desig
2 comments
Read more
More posts