Showing posts from September, 2018
Show all

Stormy Weather and a Giant Revolt 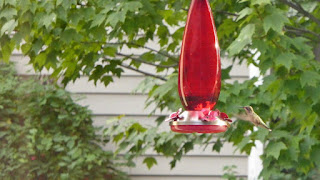 It's the 25th of September and we still have hummingbirds at our feeders. I think they're juvenile offspring from the adults that returned in early May. I've read where the adults fly south in early September while the juveniles will stay around a little longer. I usually use a mixture of 1 part sugar to 4 parts water in our feeders but as of a few weeks ago (based on a recommendation I read online), I've been adding just a touch more sugar as a high octane mixture to fuel their flight south. Each day they remain seems like a bonus day especially considering how much cooler our nights have become in the past week since a cold front and an associated line of severe weather came through leaving in its wake a lot of storm damage a half-hour south of us. The squall line  spawned several tornados in addition to straight-line winds ahead of it and wreaked havoc on Northfield and nearby communities. Keith and Tracee lost several trees while many other trees on their property
2 comments
Read more

Ride Speak and I Love Hue 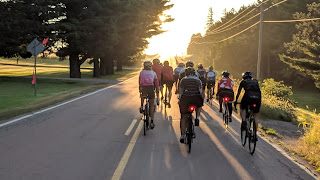 I'm sitting on the deck overlooking our backyard, enjoying the cooler temps and lack of bugs while Mandolin Orange provides background music. Charlie is keeping me company . I'm not sure it gets any nicer for deck sitting than this. To be inside right now wouldn't seem right, and no, I don't do this enough. Autumn is here and it won't be over until I've filled 60 compost bags (in addition to what gets taken away in both of our yard waste receptacles). Our leaves are still green for now but not for long. I thought I was maybe done with longish rides for the year after the Dawn to Dusk ride a little more than a week ago, but I was wrong. I decided to ride the Jesse James 💯 in Northfield last Saturday. What a fun ride! My plan was to accompany some friends on the ride at a more leisurely pace than I typically ride at but our little-peloton-that-could sorta fell apart after 20-some miles. I latched on to a fairly fast group as they passed us and hoped my legs w
Post a Comment
Read more

Dawn to Dusk 2018 With Silver Cyclists 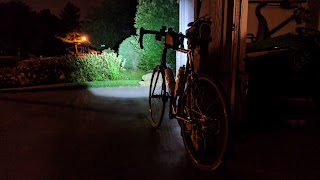 I've had a fascination with endurance sports for at least the last 30 years. I used to love to watch ABC's  Race Across America  coverage back in the '80s, making sure my VCR was set well in advance to record it. I'd sit in front of my TV and marvel at the determination of the competitors. Sure, it was as much an act of sleep deprivation on wheels as it was a race but it captured my imagination, and I admired those who put themselves in the arena to compete. The annual Ironman Triathlon coverage in Hawaii was another favorite of mine to watch. I, on the other hand, would have to be content in my personal life to make do with an occasional marathon and longish efforts on my bike. Over the past few years, I've moved away from the long rides I once loved, leaving me to wonder if I'd ever find the zest for them again. Walking 18 holes of golf was fun but hardly a replacement for the endurance athlete within me and neither were the hours spent on my fat-bike. I see
Post a Comment
Read more
More posts