Showing posts from November, 2012
Show all

What a difference a day or two can make weather-wise here in Minnesota. I took off from work early Wednesday to take advantage of some unseasonably warm temps to go walking. The weather was so nice that I was able to get by in shorts and two T-shirts. It's likely the last time the sun will see the skin of my legs until next spring. I did my west loop  (14 miles) through Murphy Hanrahan and enjoyed every bit of it, listening to tunes and feeling the sun on my face. It was so nice. A cold-front came rushing in Thanksgiving day trailing winter behind it. Tammy and I finally made it out to see Keith and Tracee's new home. They invited us over (or maybe we invited ourselves over) for Thanksgiving. They made their move nearly two months ago but we've been slow in making a point of going to see it because I wanted to have some blown glass done for them as a housewarming gift. We were so impressed with their home. It's going to take some time to do all of the changes the
Post a Comment
Read more

From Scrooge to Griswold in an Afternoon 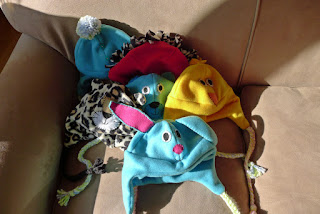 Tammy has been busy for at least the last month sewing hats and mittens that she'll give away to some of the children she works with on Tuesday nights at Hosanna. For the past 7 or 8 years, she's been volunteering there every other Tuesday painting nails of mostly young children but occasionally adults as well. She's doing such a nice job with these and putting in a lot of hours on them, I had to make mention of it here. I know she'd rather I didn't say anything but it's me tooting her horn, not her. The hats are really cute and the photo to the left is just a small sample of what she's done. I told her that I think Rachel would love a pair of the mittens she's made for Christmas. I've mentioned before in my writings how selfless Tammy is, always giving of her time to others while expecting nothing in return. Not even a thank you. I admire her so much. I know she won't be one to sit back and put her feet up when she finally steps into retireme
Post a Comment
Read more

Some thoughts for me to look back on years from now. Barack Obama was just re-elected to a 2nd term as President last Tuesday. I can't recall a president that I've ever identified with as much as I do him. I simply agree with so much of what he stands for, especially his sense of fairness. I get that many will cringe at what I just wrote but then I cringe at the thought of where I think many of you get the information you use to reach your conclusions about him. Yeah, I was very relieved to see Obama prevail last Tuesday night, rising above the constant drumbeat of negative comments about him that's been nonstop from right-wing radio and TV over the last four years. I went to bed at 10:30 just after he was declared the winner, intent on getting to sleep as soon as I could for a 4:00 AM start the next day. I laid there thinking about the election, wondering how Fox News and right-wing radio would handle the defeat. Smiling. I tossed and turned, occasionally reaching for
Post a Comment
Read more

Following up on my previous post. I exchanged a couple more emails with Bill Bohline (lead pastor at Hosanna) about Hosanna's stance toward same-sex marriage. The tone in each of his replies became progressively dismissive. Realizing that emails were a poor vehicle for voicing my concerns I emailed him asking if I could have 30 minutes of his time to discuss the matter. What I wanted was to sit down with him and together watch Greg Boyd's video. My email to him: Pastor Bill, I would like 30 minutes of your time, please. I'm available Tuesday after 2:00 or anytime Friday. Thank you, Kevin Gilmore His response to me: Kevin, you have had more than 30 minutes of my time in this last week. And that was that. Not even a "sincerely, Pastor Bill" ...just his curt response. I was left with the overriding feeling that he has little time for anybody who dares to challenge him and I sensed absolutely none of Christ's love in his words in either his last e
9 comments
Read more
More posts