Showing posts from March, 2017
Show all

Love Your Neighbor and New Wheels 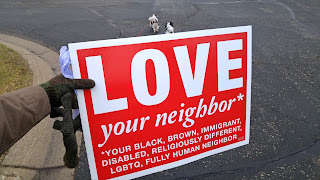 I stumbled onto a kinda cool website recently where you can search out a myriad of streaming radio stations around the globe while brushing up on your knowledge of geography at the same time. Here's a link . There's a house a few blocks away that has a sign in the front yard that encourages people to "Love your neighbor". I first noticed it about the same time a Muslim family moved in a few doors down from the home with the sign. Someone vandalized the sign recently by wrecking the metal frame supporting it. I hesitate to read too much into that. I was walking Toby and Charlie Sunday morning when I noticed the homeowner out front—I commented to him that I liked his sign while expressing disappointment that someone apparently thought differently. He quickly went to his car's trunk and gave me an extra one he had, minus the metal support. He said a church in St Paul was giving them out. I've been taking the pups on some extra long walks lately—walks in exces
2 comments
Read more

How Far Would You Go? And Meet the Folks 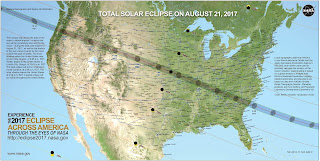 I'm not vain and neither am I considering flying my Learjet to Nova Scotia to see a total eclipse of the sun but I'm pondering the question: how far would I drive to see a total solar eclipse? I may be about to find out. This very rare event  in a city near me is going to happen on August 21st, 2017 and it will put Lakeville in an area about 80% eclipsed. To get to where there will be a total eclipse I'd need to drive to Lincoln, NE., a little more than a 6 hour drive . I think I'm off that day, and I think I'm in! I checked this site for future total solar eclipses for the rest of my life and it appears the one in August will in all likelihood be my last (and first) chance to experience one. Missing out on it would be even more upsetting than not realizing The Paper Kites were in town last Saturday night at First Avenue! Our Google Pixel phones are on their way after a wait of a few weeks while they were sold out. Rachel dropped her LG G4 in the tub last month
6 comments
Read more

23andMe and Our Growing Family Tree 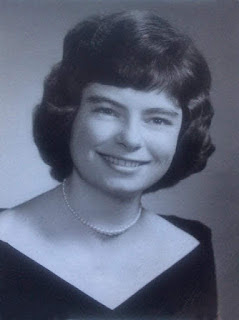 My nephew Dan recently sent in a sample of his DNA to 23andMe to have it analyzed. The results showed that he had a close match (of the 1st or 2nd cousins variety) with Emily, a woman in Montreal, Canada. How could that be? They exchanged emails. It turned out that Emily's mother, Cynthia, was born to a single woman named Erie in 1947. Erie never married but took the last name of her daughter's father even though she'd lost contact with him and I assume never heard from him again. Emily told me that they were always told the name of Cynthia's father was John Gilmore. My father's brother Jack also went by John. From what Emily has told me about her grandmother, Erie was a strong, independent woman having served in the Women's Army Corp during WW2. She taught veterans job skills at a vocational school after the war in Brockville, Ontario , a city some 2+ hours southeast of where my father and his brother Jack grew up in Douglas, Ontario. I've learned that m
Post a Comment
Read more

Another Branch to Our Family So Says 23andMe! 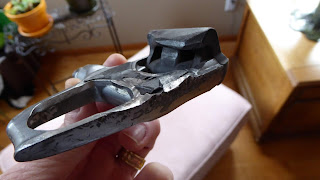 The thought of having my DNA analyzed for a more precise understanding of what sort of mutt I am has been mildly intriguing to me. I considered doing it a while ago but I was told that the results are quite vague and to not expect any sort of real definition that can point one in a specific direction to see where their ancestors came from, so I took a pass. But now I'm not so sure it's all that useless. A family member recently sent his DNA off to 23andMe to see what he could find. He found a lot! I won't go into detail but what I can say is that there's another branch to our family on my father's side that none of us knew existed. It's quite cool and the photos I've seen leave little doubt that there's a connection. I hope to be able to be more specific in the near future but now is not yet the time. My go-to road bike is a 2006 Serotta Legend Ti  with 48,000 miles (77,000 km), and it continues to serve my needs well. We've been through a lot
Post a Comment
Read more

I've done zero stained glass work this winter and I'm a little disappointed in myself for not making time for it. It's not something I want to force to happen so I'm content to know the craft is waiting for me when I'm ready to dive back in again. I seem to have so many other things that vie for my attention—bikes and walking, mostly. Too often I find there's not enough hours in a day for me but that's a good problem to have in retirement I figure. We were at Grace Lutheran Church in St Paul last Saturday and I absolutely fell in love with their faceted stained glass windows that were assembled in the early '60s. Of all of the stained glass styles I like, faceted is the one that does the most for me with its bold, abstract renderings. I've never tried my hand at the style but I'd like to someday. Here's a series of videos about faceted stained glass construction if you're interested. (I have autoplay enabled so one video plays right
Post a Comment
Read more
More posts