Showing posts from October, 2019
Show all

Gone Too Soon and an Impressively Frightening Makeover 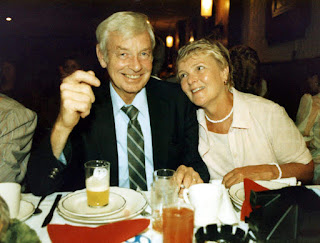 My dad would've turned 94 today had he not passed away so soon, 6 weeks shy of his 70th birthday due to emphysema. There was a side to him that he was never comfortable opening-up about—mostly related to his childhood and losing both of his parents at an early age. I respect that decision of his to keep that to himself. I do wish, though, that I had been closer to him. I didn't need to know the details of his past but I would've liked to have had a more meaningful relationship with him. I can't recall the two of us ever sitting down and talking about how I was doing; what were my interests or plans for my future. I was so in need of his guidance and assurance but that need seemed lost on him. With 5 other siblings contending for his time in addition to his frequent business trips away for days on end, I suppose we all just accepted what little he could give us in the way of attention. But having said all that, he did offer sage advice to me when I needed it most a
Post a Comment
Read more 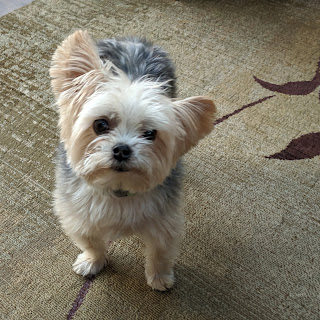 I had my day fully planned. I was going to process some video from last night's ride then head off to the links by mid-morning. Charlie would get his walk in the afternoon before Tammy and I left on a dinner date with friends. The golf part of my day has been canceled and I'm sitting here chilling on the couch with Charlie and Dublin—my sister Claudia's cute little Yorkie with a cockeyed ear. I got the video processed but that's it. I'm content to watch the world pass me by today. I need to allow for more of this in my life. I golfed yesterday so that itch has been scratched. I was thinking recently how when I was working, I was always checking to see what time it was as I attempted to stay on task to get done whatever needed getting done before I had to leave for work. It's nice not to have that urgency about my days anymore but honestly, a little bit of urgency to jump-start the day can be a good thing. We made arrangements to meet some friends and take
Post a Comment
Read more 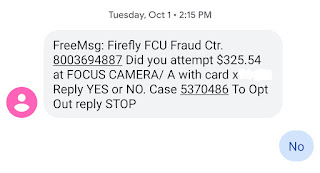 I was riding my indoor trainer last week when I received a text message from our credit union inquiring about a charge on my card. I quickly replied to the text then halted my workout to have a closer look at our account and to speak with a representative from our credit union. Whoever had my card information had also made a purchase at GameStop for something in excess of $300. My card was immediately deactivated and rendered useless. I drove to the credit union and was able to obtain a replacement card with no hassle within an hour of first learning of my card being compromised. At the suggestion from the rep at the credit union, I've also installed an app on my phone called SecurLOCK Equip which allows me more control over my credit card. I can deactivate my card when I'm not using it or set spending limits in addition to some other options. Plus, the app immediately notifies me whenever there's a transaction on my card. I like the extra layer of protection. I'm cu
Post a Comment
Read more
More posts