Showing posts from October, 2018
Show all

Leaf Me Alone Already! Please! I'm Done With You! (Almost) 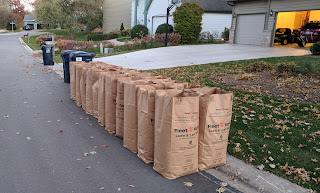 In keeping with my strange obsession with tracking meaningless stuff, I'm up to 50 bags of leaves this year. That's important to know because once I get to 59 (the most I've ever filled), I'm pretty much home free when it comes to yard work, and I could use a break. I typically mow/vacuum up leaves once, maybe twice a week but I was out there 5 times in the last 7 days! I've never done that. It gets a bit overwhelming if I wait too long so I sorta like this new approach. With the exception of some major trimming of trees in our yard, I've done all of the landscaping work myself over the years, until now. I hired a guy to remove 3 Japanese Yews in front of our home rather than do the work myself. They'd become overgrown  from 26 years of growth in spite of my best efforts to keep them trimmed. I was reading online where they're a real pain to remove because of their root structure and I just didn't want the hassle, not with all of the other yard wo
Post a Comment
Read more 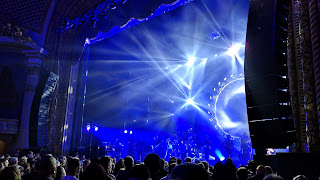 The plan was to spend the day in the yard but a steady snowfall through the morning and into the afternoon kept me indoors. I was in need of a lazy day so I was happy to comply. Tammy and I went to see Aussie Pink Floyd at The State Theater in Minneapolis Friday night. They're an Australian band who play Pink Floyd covers. Pink Floyd has been a favorite for as long as I can remember and their lead guitarist, David Gilmour, is one of the coolest guys in rock. I wasn't sure what to expect when we sat in our seats. The guy next to me said he'd seen them before and that we should expect an awesome show. He wasn't fooling. He also said the band has been performing together for about 30 years and that they were actually hired by David Gilmour to play at his 50th birthday celebration. What a fun night! Here are some snippets of video I took of a few of the songs they played. There was so much more. As we were leaving the theater we were greeted by some buskers drummi
Post a Comment
Read more 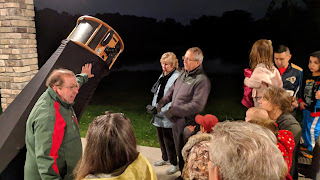 It's dusk as I sit down to write this, and it's usually around this time that I can look out at our hummingbird feeders and see at least one little flyer feeding at them before darting for the safety of the dense foliage between the neighboring homes. But not tonight. It appears they've all made the trip south. The last sighting I had of one was last Saturday morning. Safe travels, my little friends! My niece Erin and her daughter Anja went to see an astronomy/stargazing class last week put on by Mike Lynch, a meteorologist for WCCO radio. It's something I've been meaning to do for the longest time but hadn't, until last Thursday night. (Thanks, Erin, for the prompt.) Our family lived two doors down from Mike and his family  in 1965 when I was 8 years old. I'd long since lost touch with Mike, Don, and Steve so it was nice to arrive a little early before Mike's presentation to talk with him. Through Mike, I was able to reconnect with Don. Don and I
Post a Comment
Read more

I Believe Her, Moving On and Charlie Turns 10! 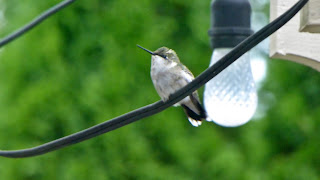 I was sitting with the pups and my laptop this morning in our sunporch when something in my periphery caught my attention. I hadn't seen a hummingbird at our feeders in more than two days so I assumed they'd all begun their 2-week trip south to more hospitable weather. I was wrong. It's October 1st and we've still got at least one hearty soul staying put. I quickly changed out the nectar in their feeders for one last time. I think. Tammy and I spent all of Thursday watching the testimony of Dr. Blasey Ford and Judge Brett Kavanaugh before the Senate Judiciary Committee. She claims he sexually assaulted her 36 years ago and that her claim needs to be heard before he's granted a lifetime appointment to our nation's highest court. It was riveting television but it was also exhausting. I was left with a helpless feeling that Kavanaugh's confirmation is pretty much a sure thing. Democrats simply don't have the votes to stop it, and it's doubtful that th
Post a Comment
Read more
More posts