Showing posts from December, 2008
Show all

Long before Tammy and I ever met, we attended the same Pink Floyd concert together in June of 1994. I went with my friend Scott and she with her husband to be. They played at the HHH Dome in Minneapolis and although that's usually a lousy place for a concert, you wouldn't have known it that night. Tammy told me how the guy next to her fiancé blew (pot) smoke in his face and he took offense. Tammy had to tell him that he was only trying to be nice. I first heard about the band in 1970 from a friend in my 7th-grade sculpture class. He was talking about their album, Ummagumma . It would be a few more years before I'd actually hear anything from them but when I did I instantly became a fan. How could you not? Several of their songs have made their way onto my mp3 player which I use on my bike. Tammy gave me a DVD of Pink Floyd's last concert performance from 2005 for Christmas. Live performances usually leave me disappointed with the exception of a couple, Peter Frampto
1 comment
Read more 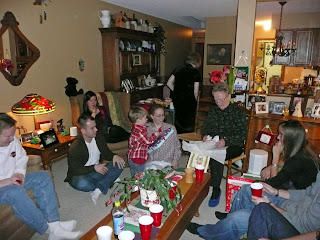 When I was 8 years old we were living in our home in Wayzata . It was just up the street at Jimmy Ward's house that I learned there was no Santa Clause. The Christmas of '65. I'd never even considered the idea until Jimmy told me. I took the news to my older sister Jackie and she confirmed it for me. Looking back, I have no idea how it wasn't Jackie who would've been the one to reveal this to me. She was the one who on occasion would tell me ahead of time what I was getting for Christmas after she'd done her reconnaissance work. If there was no Santa, then what were the chances that the Easter Bunny and Tooth Fairy were also frauds? I was careful to keep the secret from Keith and Tim who were still fully sold on the scam. Christmas day 2008 has been a full one. I got to bed late last night after visiting with family, attending Christmas Eve services, and opening gifts while staying up too late. My alarm got me up at 4:30 this morning and I had to sit on the ed
2 comments
Read more 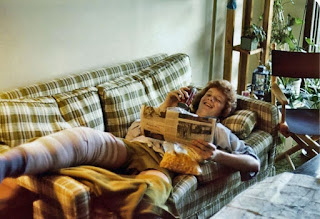 This is part three of I'm not sure how many. Find part one here. 12/31/1975. Less than one month before this date I never would've imagined I'd be spending New Year's Eve in Boot Camp. But there I was and surprisingly, I was already feeling comfortable in the routine. Easily my biggest concern going in was how my right knee would hold up to the physical demands of the 8-week training as I'd torn ligaments and cartilage in it twice in the previous six months and had my leg in a full length cast each time for one month during the recovery. It was far from healthy. The most stressful thing was all of the marching we had to do but I think that only helped to make my knee stronger. As long as we were on base there was no such thing as motorized transportation. We marched everywhere, in neat rows. Everyone had a specific place in our platoon's formation and as the weeks went by, our improved synchronization became noticeable. We'd sing out cadence sort of li
2 comments
Read more 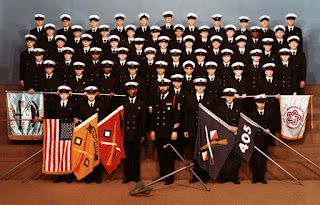 This is part two of several. Find part one here. The whole idea of joining the Navy was a bit intimidating to me but I'd soon figure out that most of the guys I was traveling with on our way to Boot Camp in Chicago were feeling the same so there was some relief in that. My game plan was to keep a low profile and not draw any unnecessary attention to myself. The main advice being passed around among us was to not volunteer for anything. I could only speculate why that was good advice but I'd go with it. I remember being rousted out of bed the first morning in our barracks to the sound of our Company Commander (CC) banging a baseball bat inside a garbage can at some way too early an hour. This was our first exposure to him and if it was his intent to get our undivided attention, he succeeded. This was the real deal and there would be no hiding or turning back. We spent a good amount of time in the coming days standing at attention beside our bunks while our CC walked up and
4 comments
Read more 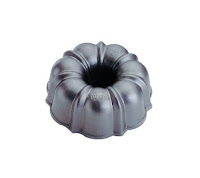 I think I've mentioned here before that I was a lousy student in high school and probably going back before then. I'd include a senior photo from my high school yearbook but I never bothered to have one taken. I did the minimum to get by and for the most part, I did a good job of that while falling through the cracks. With six kids in our family and a father who was away on business much of the time, it was easy to slide by undetected so long as none of my teachers were calling home. I honestly don't think my parents ever asked to see my grades. If they did they never expressed any concern about the education I wasn't getting. I didn't even bother to attend my graduation ceremony. How disconnected was that? The summer of '75 after my senior year was a blast but I knew my carefree days were numbered and when nearly all my friends headed off to college in the fall, the party was over. It didn't take much to convince me that I needed to do something more wit
5 comments
Read more 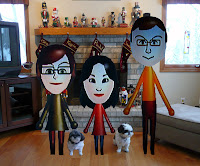 I'm not sure I'll post anything between now and Christmas so I'll take just a few seconds to wish you all a very merry Christmas and hope that you're able to spend some meaningful time with family and friends over the holidays. We do a family photo each year and send it out with our Christmas cards. This year was no different, or was it? I mentioned to Tammy that I'd like to use the characters we made for ourselves on our Wii as our stand-ins. Tammy liked the idea and added to it by writing on the cards, 'Wii wish you a merry Christmas'. I suppose the play on words will be lost on some but I think most will figure it out. The photo to the left was my third of three attempts and the one we included in our cards. The figures I used were of photos taken from the TV and cropped into a photo taken in our family room. My first two attempts ( attempt 1 and attempt 2 ) were done using an online avatar editor to create our Mii people. I like our actual Mii chara
2 comments
Read more

Jalisco House-hop and Thinking of Gifts 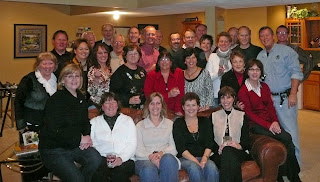 We had our annual Jalisco Terrace house-hop last night. It's a progressive dinner organized by Rick and Jean Kraus. They do a great job of putting it together and keeping it on schedule once it begins. Lots of laughs and conversation. Once winter sets in around here, we all sort of cocoon ourselves in our homes and don't get a chance to interact much. The house-hop is a nice way of breaking that cycle. I was able to finally get my bike back out on the road yesterday before the house-hop so I could create a calorie deficit with which to more easily eat more than I should last night with less guilt. We've been getting our fair share of snow and then some which has kept the streets icier and snowier than usual, keeping me confined to my rollers in our basement. The bottom falls out of the thermometer tomorrow but with any luck, the roads will be dry so I can keep doing my thing on them. I'm 140 miles short of 6000 road miles for the year and I'd sort of like to ach
1 comment
Read more

Winter's Push, One Busy Kid and Thoughts on The Shack 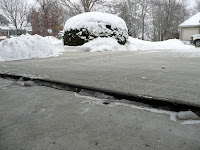 ​Our newly laid concrete driveway is raising up under the stress of winter weather. It used to be that when I'd drive into the g arage it was a smooth transition between the driveway and the garage floor. I noticed yesterday that there was a bump as I drove in. I got out to look and sure enough, the driveway is nearly an inch higher than the garage floor. Having rebar encased within the cement should help the stressed area raise in unison and minimize the chances for cracking but I know what they say about concrete driveways: there are those that have cracked and those that will. Still, I was hoping to get a few years out of it before I have to look at any cracks. Rachel has been a bit overwhelmed this past week by the demands of both school and work. She teaches dance at the studio where she takes instruction and she's been asked to do more than she bargained for since one of the other instructors has been away with some health issues. Rachel loves to teach but they've
Post a Comment
Read more 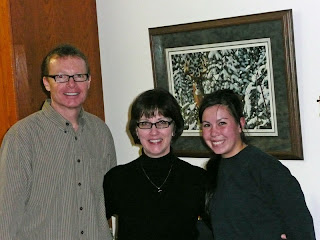 Tammy turns 51 today. I thought I knew what 51 was supposed to look like but now I'm not so sure. I don't see either of us as being what I used to see 51 being when I was much younger. It's funny how perspective changes as we get older. 50 is the new 40 or something like that. When my dad was the age I am the year was 1976. He had just moved what remained of our family out east to Pottstown, PA. I remained behind to finish high school. My image of him back then was that he was a pretty serious guy, focused on his work and always busy with projects around the house. We didn't talk much. He seemed much older to me than he was, at least from my current perspective. I have to wonder if Rachel sees me the same way I saw my dad at this same age in her young eyes? I suppose it's okay if she does; at least we talk. A photo of my brother and father from back in the day, circa 1976. We had a bit of a surprise birthday party for Tammy last night. We had friends from our
2 comments
Read more
More posts