Showing posts from April, 2013
Show all

Spring finally made it to Minnesota this week in a very nice way but not before leaving the returning Robins cut off from their supply of worms with 5 inches of fresh wet snow on Tuesday morning. Mom was telling me that raisins make a good substitute food for them. I looked but we had none. I noticed outside our laundry room window that tulips were beginning to push their way through the snow in the front flower bed. Finally! Do I detect a hint of frustration or worse from a co-worker or three because I intend to work beyond age 56? (The mandatory retirement age from which I'm exempt.) I think I do. It's something I began to notice a few months ago and seemed to begin around the time I first talked about staying an additional year beyond my original planned retirement date of January 2014. I can think of no other reason for the changed attitude toward me by a few people. I actually find it amusing while at the same time recalling the clique in high school I was once a part
2 comments
Read more

A Nice Send-off Amidst a Wintery Spring Week

It's been a crazy and heavy news week here in the US. Between the terrorist bombings at the Boston Marathon and the filibuster of the Senate for background checks for gun buyers to the return of winter (if it ever left) in Minnesota, there's been little room for good news this week but there was some.  Julie Damico's retirement party was one of the bright spots! Even if it meant braving some pretty slick roads to get there it was one I didn't want to miss. Julie's last day was 3 weeks ago and already you can see that it looks like she's gained at least 5 years of her youth back by the look on her face. I joked with her that it was the wine that was giving her such a nice glow (and it may have helped) but in all reality, I think it has more to do with getting back to a normal schedule, a thing that air traffic controllers know nothing of. She looked so rested. She's excited about doing things in her own time and not being owned by the chaotic schedule at
Post a Comment
Read more 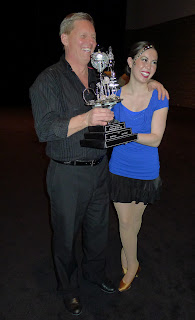 Cabin Fever: a condition in which a person feels unhappy or bored because of spending too much time in the house, esp. in winter. Yup. I'd say that pretty much describes just about anybody you talk to who is still looking at snow on the ground with frigid temps, including me. I had to laugh earlier in the week when a friend wrote on her Facebook wall about her 3-year-old daughter waking up and being enthused that it was snowing outside. Someday she too will succumb to the fever. My daughter loves to dance. It's something she works hard at but it's also something that comes naturally to her. I never tire of watching her dance. A few years ago we thought that we'd enjoyed her last public performance after her spring recital when she left her dance studio behind for college and a change of cities. We were wrong and we couldn't be happier about it. She's been part of UMR's Ballroom dance team since arriving in Rochester, co-captaining it for two of those yea
Post a Comment
Read more

Is it possible to have both a relaxing and a full weekend? I think I just did. We got together with Karen Thursday afternoon to do some needed legwork toward our sunporch/deck project. More about that here. I've resumed the walking that I unexpectedly fell in love with last year. I need to ease back into these seemingly easy workouts though because they're leaving their mark on me with tender shins and some sore spots on the bottoms of my feet. 10.5 miles a couple times a week is a little much until I'm conditioned. I'll get there. I made it out Friday afternoon for the Hampton loop . Yes, those were flakes of snow toward the end of the video (for those who watched) as the spring that just can't seem to get going continues to spin its wheels! It had been close to 18 months since I've last done this ride. It's really nice to be back on the road again. There are so many rides ahead of me that I look forward to, places I haven't been since late fall o
Post a Comment
Read more 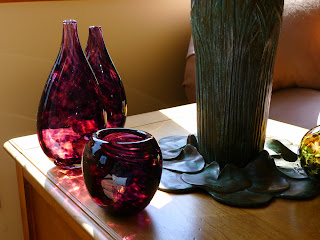 We had a nice time in the studio on Friday. The work we did was just so-so but we enjoyed the time spent working on our skills. Nate and Rex were there on the far bench. They always have a good vibe around them which we appreciate. I was pleasantly surprised when we walked back to the cold-shop to pick up our work from the week before. The colors of the pieces I'd done were so rich and deep. I don't typically get that sort of result using frit. Frit is small pieces of colored glass that you roll a gather of glass over to add color to the glass. Usually, it results in a more diluted color than what I achieved with the combination of frit I used on these pieces. It's not often that I walk out of the cold-shop with a smile on my face the way I did with these in hand. We drove down to Rochester on Friday night to spend some time with Rachel and Tony. Rachel just moved into some new digs a few doors down from where she'd been staying. She showed us around her new place
Post a Comment
Read more
More posts