Showing posts from November, 2017
Show all

Francis Jennings and the Seisable Johnsons with RaeNelle Ostberg, and a Side Hustle 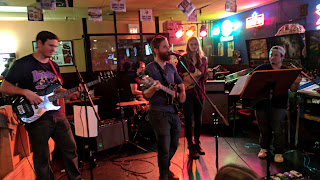 Tammy is deep into the series Game of Thrones . Season 5 is sitting on the bench in the laundry room waiting to be returned to the library. She's often up in her craft room watching it while working on projects. Every once in awhile I'll hear her yell out, "Oh noooooooo!!" I know enough about the series to know that many of the favorite characters are killed off when you least expect it. I think I'll pass. Cindy (Tammy's sister) was in town this past weekend and they went to see  Daddy's Home 2. Tammy said it was "hilarious!" I think that's more my speed. We went to Tammy's nephew's home for Thanksgiving and enjoyed ourselves a lot. Brady and Kaylee's 2 little ones provided most of the entertainment. It was nice visiting with everyone (John, Stacy, Rick, Karen, and Eric were also there) while watching the Vikings try and lose a fairly large lead. Kaylee used to be the lead cheerleader for the Vikings until recently and can only
Post a Comment
Read more 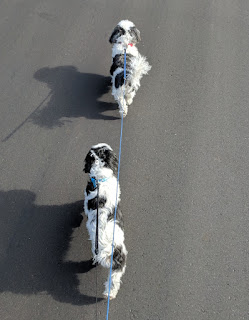 I've been getting in some nice walks with Toby and Charlie in the cooler weather. I use various Garmin devices to track my activities throughout the week and I recently decided to track my walks with the pups separately rather than mix them in with my solo walks or golfing; mostly so I could more easily see how far we're walking together each week. The results are in—here's a typical week for us. That's 13.45 miles (21.65 km). Or viewed another way . I mentioned in a previous blog post how Toby loves to run. He's not at all an alpha-male but when he's leading us in a run and Charlie tries to take the lead, Toby runs even harder to stay in front, sometimes leaning his body into Charlie to keep him from passing him. I think that's so cute! Tammy and I went to see Le Ride a few nights ago. It played across the country for one night only in select theaters. I was prepared to go alone but Tammy was also interested in seeing it. There was a time when we both u
Post a Comment
Read more

There's No Sweeter Guy In My World 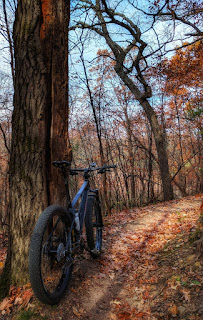 I was hoping to get in at least a few more rounds of golf this year but my golf season has come to an abrupt end. Our temps have cooled considerably to where we're hovering around freezing with no relief in the long-range forecast. But even if the weather were to cooperate I still can't play. I crashed my fat-bike at Murphy last week and landed hard on my chest, injuring my ribs on my right side. I think I may have caught my right pedal on something causing me to crash on a part of the trail that's not at all technical. I was down before I had a chance to react. My left leg was cut up as well as my face just to the right of my right eye. I hurried home and cleaned up before Tammy could see me but there was no hiding from her that I'd crashed. Crashing goes with the territory, especially on the trails. And if I'm honest with myself I have to admit that I've avoided trail riding for much of the summer because I know there are risks on the trails and I didn&#
Post a Comment
Read more
More posts