Showing posts from August, 2012
Show all

Our Little Girl is Gone 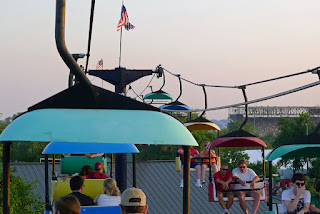 My vacation days are done for the year with the exception of a few days in the fall that I have set aside to work in our gardens and rake leaves and such. It's not too often that I return to work feeling reasonably rested and ready to go back but that's how I felt Sunday afternoon. It's been a busy few days for Tammy and me. We made our annual trip to the Minnesota State Fair and had so much fun. It was one of those days that I look back on and wish we could do it all over again. We got a mid-morning start and drove to the transit station in Burnsville where we caught a bus to the fair. It's the best way to go especially considering we had zero waiting between the time we got to the bus station and when we loaded up and took off. We both agreed that the best deal at the fair was at a small vendor where they were selling $1 snowcones . With the temp approaching 90º, they were such a deal! If I'm not mistaken we each had 3 of them. My only regret the entire day
Post a Comment
Read more

I'm now under 500 days remaining in my career. My union rep came up to me last week to see how firm I was on my date of 1/2/2014. I responded that "I'm 75% sure." I'm ticking down the days, 100 at a time at this point but you know what they say? If you want to make God laugh, tell him your plans. I was outside watering our Impatiens a few weeks ago when I noticed a dust flying off them as the showering water from the hose made contact. I thought it was strange as I'd never seen anything like that before. I didn't think much of it but several days later I noticed the plants were losing their petals and leaves. I thought that maybe I'd burned them when I fertilized the lawn so I waited for a little over a week to see if they'd grow new leaves and flowers but it wasn't happening. I found a video online that I think explains what I was dealing with—a death sentence for Impatiens:  Impatiens Dying from Downy Mildew . I've been doing lots of wa
2 comments
Read more 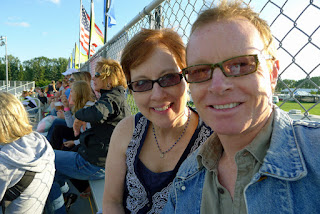 We did our annual trip to the Dakota County Fair on Wednesday night. Typically we go on a night when we can take in the demolition derby but no such luck this year. We had to settle for Extreme Bull-riding. Since neither of us has ever been to anything resembling a rodeo we thought it might be fun to see what it was all about while adding a little culture to our lives. And this was to be 'extreme'! How cool would that be? Not very. I was half expecting a guy to come out riding two bulls at one time. We were in for nothing of the sort. I have to say that it was actually a little sad and at times, bordering on either pathetic or cheesy; I'm not sure which. Sad because some of the bulls were clearly past their prime. One, in particular, that walked (not sprang as you might expect) out of the chute carrying its rider, then laid down in the dirt after four or five paces. I'm quite sure I could've ridden that poor guy. Pathetic or cheesy because the rodeo clown co
7 comments
Read more

I live my life on both ends of the technological spectrum. I appreciate the simple, sometimes crude tools used in glassblowing and the beauty they can bring about but I also embrace the more modern, techie stuff of our time; stuff that relies on strings of 1s and 0s to shape their end product. There was a time when I teetered on the brink of becoming a Luddite but those days are surely behind me. We were driving through our neighborhood recently on the way back from a session of glassblowing when we happened upon the Google Street View car capturing data from ground level for the rest of the world to see. My first thought was "cool!" but then I began to wonder if the driver had mapped our street already. I parked our car in the garage, grabbed my camera and sat outside waiting for it to come by so I could once again manage to get my mug in Google's images of our neighborhood. No such luck. After waiting 10 minutes I decided to walk to where we'd seen the car but it
Post a Comment
Read more
More posts