Showing posts from October, 2004
Show all

October 24, 2004
I’m appalled at the beheadings occurring in Iraq but I have to wonder; are we as a society really any better than the terrorists who would do such a barbaric thing to another person? Is a partial-birth abortion any less gruesome than you average everyday run of the mill beheading? It’s not. But hey, we need to get Bush out of office because he wants to make it illegal to do such a thing and for those who lean left I suppose that’s a bad thing. I hope I’m able to one day enter the Left’s stream of consciousness so I too can be enlightened and join in the fun and be able to say that I’m helping make the world a better place. Maybe in another life.
Post a Comment
Read more

What Do You Do?

Here’s a hypothetical I wrote as I ponder the situation America finds itself in today. Feedback is welcome. You’ve been elevated to the highest office in the world and for whatever crazy reason it dawns on you that the world is sort of dependent upon oil for its very survival. You’ve seen the bumper stickers, ‘no blood for oil’ but you never really gave it much thought—I mean, it sounds good, doesn’t it? So you start to wonder—okay, let’s say that all the oil-producing countries are overthrown by some radical Islamic sects and they collectively decide they don’t need our money any longer and they turn off the spigot. What do you do? It’s not our oil after all and we really have no right to take it from them. You try to imagine an America without oil to fuel the cars which take people to their jobs. For a moment you imagine an America without jobs. You picture deserted highways void of the never-ending whine of 18-wheelers as they transport goods from manufacturers to consumers. Wow,
Post a Comment
Read more 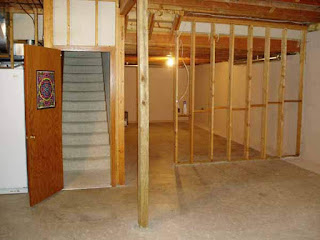 We're finally doing it...we're finishing our basement. We'll take this baron, cinder block lined enclave and turn it into a warm and cozy family place. I say warm because part of the plan is to build a sauna where we can melt away the cares of the world. I'd love to be able to do the work ourselves but I'm no pretender when it comes to matters such as this and I think it's best left to the pros. Keith will be doing the cabinets and bar for us while his friends, Dan and John, will do the rest of the work. Dan is a former Northwest Airlines mechanic who began his remodeling business after being laid off several years ago. John is also a laid off airplane mechanic and together they come highly recommended from Keith. We had a garage sale a few weeks ago and were able to part with all sorts of stuff we'd been storing in the basement. It actually looks pretty nice down there now without any clutter. Today was day one of the project. They mapped out some r
Post a Comment
Read more

October 14, 2004
I worked the all-night shift last night. I took over the sector at 3:20am just in time to vector John Kerry's Lear jet (N93LE) into Sioux City, IA. He was coming in from Glendale, AZ, having just finished the last debate with President Bush. I didn't get to see the whole debate but what I did see seemed to be a repeat of the first 2 debates. It's anybody's guess as to who will win the election. I'm tired of the divisiveness but I don't blame the president for that. I think the left has been relentless in their attacks and have done nothing to further unity. I could go into a long list of what I'm bothered by but I don't have the stamina for that tonight. Tammy bought the DVD, Fahrenhype 9/11 at BestBuy a couple nights ago. It debunks Michael Moore's claims against the Bush administration. Check it out if you're at all interested in hearing the other side.
Post a Comment
Read more

October 13, 2004
We've had a string of nice warm days but it appears they're coming to an end. I got out on my bike today and had a very good ride. There was little to no wind and I made tracks to Northfield getting down there with an average speed of just over 20mph. I headed for home and found a good rhythm until I flatted with 10 miles to go. Just as I pulled over, Keith came up behind me in his truck and stopped to see if I needed any help. We chatted while I got my tire fixed. I found my rhythm once again and pressed for homecoming in at 20.24mph over 50 miles. I spent a good part of yesterday trying to decide if I'd made the right decision in buying a TV from BestBuy. I had a coupon which saved me 12% off the price of a 50" Sony but then a couple days later I began thinking that maybe we'd be better off with a 55 or 60" set. I went back to BestBuy on Monday night and changed our order from a Sony to a 60" Panasonic. Then yesterday I searched the net and found a bu
Post a Comment
Read more

My Last Long Ride of the Season I took today off work to go out for what may be my last long ride of the season. The temp got into the upper 70s today and for this late in October that's pretty nice. Actually, the next few days are supposed to be well above normal. I got up early and couldn't go back to sleep I decided to get a jump on my ride and made it out the door by 8:00. It was a bit cool at 52 but I rode hard for the first 30 minutes and I was comfortable. I headed out County rd 46 and rode that west then took Hwy 5 north to Hwy 13. The traffic was pretty busy along 13 but I always get a rush from it. It also helps to have some good tunes to motivate you. I remember having the New Radicals pushing me along as I caught drafts from the passing traffic. Cruising past Valley Fair now and thinking about all the fun times we had there this summer. I remember a few years ago when I couldn't pay Rachel to ride the Corkscrew. She was maybe 10 at the time and still a bit afraid of most of the larger rides
Post a Comment
Read more
More posts