Showing posts from August, 2013
Show all

It Was a Friday to Remember! 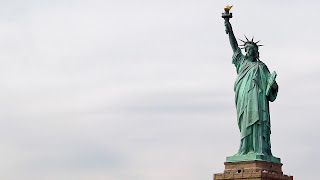 We got back from NYC on Sunday morning. What a fun trip that was! I only had one full day in the city but with Tammy's planning skills we were able to make the most of it. She and Rachel arrived there earlier in the week having taken a little over two days to drive there. I've mentioned in a previous post that Rachel will be spending the first semester of her senior year out there at Stony Brook College on Long Island. Tammy arranged for us to take a 5-hour bus tour of the borough of Manhattan (it's not a city). It was a great idea. We got to see so much of Manhattan while at the same time not spending the entire day on our feet. The tour guide was so good. She knew all sorts of interesting trivia that she sprinkled throughout her talk as she guided us along. While walking the streets of Manhattan it dawned on me that the rude and obnoxious people of NYC that I fully expected to be surrounded by were avoiding me. Even behind the wheel in traffic, they were keeping their
Post a Comment
Read more

Big Monkey in the Big Apple 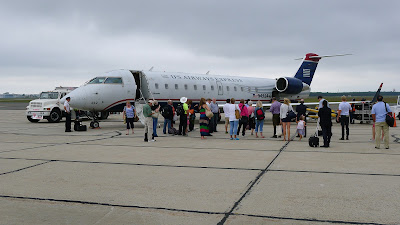 I flew out mid-Thursday morning to rendezvous with Tammy and Rachel for a late afternoon arrival in Islip, NY, the closest airport to Stony Brook. The only hitch in the whole trip was a new can of gel shaving lotion that became the property of some TSA worker. I suppose I was figuring a gel product would be safe from their feasting eyes but apparently, I don't travel often enough to know what terrorists are using these days to bring down planes. I made a connection at Reagan International where I traded my Embraer 145 for a CRJ2 , a dog of an airplane that all too often struggles to reach altitude. We maxed out at a wimpy 29,000 feet on this final leg of the journey. I'd intended to read my Kindle (Don Felder's Heaven and Hell: My Life in the Eagles) but I scrapped that plan pretty much as soon as a guy in a look-at-me big cowboy hat sat down next to me. He was chatting on his cellphone while he took his seat. "This is Big monkey...so you're sure my passport
8 comments
Read more 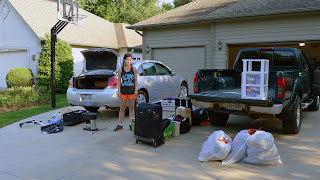 I was at a stoplight a couple days ago when I noticed a police car waiting opposite me for the light to change. I briefly wondered if someone would run the light as so often happens and would the officer ticket the driver. Sure enough, a cement mixing truck barreled through the intersection just as the light was changing to red. A brief moment passed as I waited for green and as the light changed, a red SUV easily going much faster than the posted 45 mph blew through the light. The cop, who was intending to go straight made a fast right turn in pursuit. I'm curious to know the excuse offered up if there was one. I've gotten in the habit of looking left and right before pushing the accelerator. I never used to feel the need. Tammy and Rachel are trekking their way across the country to Stony Brook, NY where Rachel begins school in one week. Tammy drove my pick-up down to Rochester Saturday afternoon to fill it up with one last load of Rachel's belongings and to bring her h
Post a Comment
Read more

An End in Sight After 15 Weeks 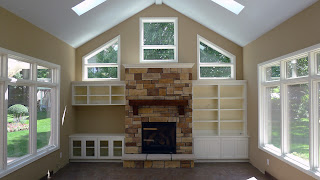 I woke up this morning and toyed around with the idea of going for a walk before work. Attending church no longer figures into my routine. I went downstairs to power-up my laptop and check the weather because it was looking a little gloomy. I found that the sporadic internet problems I was having last night had become more than that. Several attempts to fix the problem got me nowhere so I got on the phone with Charter who diagnosed my troubles as an unresponsive modem. Not the beginning of the day I had hoped for. A new modem from the store I usually don't like to frequent or mention has us back online. We saw lots of progress made on our sun-porch and deck addition this past week and the end of the project is now in sight after 15 weeks of construction. That realization comes as a relief as our home begins to return to normal. We're still waiting on a replacement door from Marvin Windows. It's supposed to ship out tomorrow from their Warroad plant 380 miles north. Hope
Post a Comment
Read more

A Love Story and a Fair Weekend 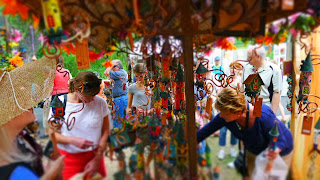 I came into work last Wednesday morning to hear the sad news that Lenny had to leave the all-night shift early at around 2:30 in the morning because both of his parents had passed away. A car accident? A fire? No, neither of those. A real in-life and in-death love story. Edit: The article is no longer there from the paper it had been published in. Lenny's father was taken to the hospital suffering from a heart attack. His mother, distraught over the thought of losing him died less than two minutes before her husband succumbed. Tammy and I spent much of our weekend (both Friday and Saturday afternoons) at the various art fairs in Minneapolis: Uptown, Powderhorn, and Loring Park. We knew artists displaying their work at each location so it was nice to visit with them but we didn't get to see them all. We arrived at Powderhorn just as it was closing and only had time to chat with Steve. We kept him there beyond the 6:00 closing time but I'm quite sure that was fine with hi
Post a Comment
Read more
More posts