Showing posts from July, 2005
Show all

July 27, 2005
I've had 3 of the last 5 weeks off from work. It's been nice to be away. Tammy and Rachel were at the Sonshine Music Festival in Willmar, Mn for 3 days last week. I stayed home with the pups and spent some extra time on my bike. I managed to put in over 500 miles last week. I'm on track for 6000 miles by my birthday in late August—that's sort of been my goal—same as last year. I found a wallet on my ride yesterday. I was flying along country rd 46 at about 33 mph when I saw it laying on the shoulder. As I drove by it I could see a driver's license. I put the brakes on and circled back for it and put it in my jersey pocket to check it out when I got home. I had no idea what it contained other than the driver's license. It was loaded with cash—$286 worth as well as a credit card and some other IDs. I'm surprised nobody else had stopped to pick it up as the area was very busy with traffic. It had been run over several times. Tammy gave the owner a call and d
Post a Comment
Read more

I'm Part of a System I Am

US intelligence under Clinton was drastically cut. If the intelligence Bush used was bad you can look to Clinton to own a good deal of the blame for that. His administration was more concerned with prosecuting Bill Gates than they were the threats which really mattered to our country. It was also the Clinton administration which made regime change in Iraq a goal. Bush followed through and made that happen and he did it with the best intelligence information he had to work with. If you disagree with our invasion (I prefer to call it liberation) of Iraq for the purposes of regime change, is it also wrong that we had sanctions against Iraq? The sanctions only hurt the little people. Was it wrong for us to put any restrictions on Saddam at all? Did you ever believe there were WMD in Iraq and that more were being assembled? What happened to them? Everyone who was anyone in Washington was saying that Saddam had them and they needed to be taken out of his hands. Would it have been smarter f
Post a Comment
Read more 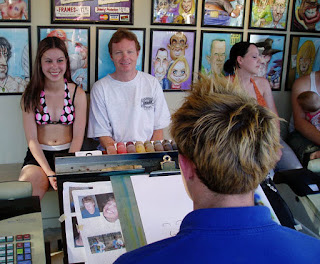 Happy birthday America! I'm back to work after being having a couple weeks off. I love my job and most everything about it but I really needed to spend some time away. We didn't plan any extravagant out of town trips this summer as we indulged ourselves a bit more than we planned on our basement project On my first day off we went to Valley Fair and had a blast. There were very few people there and most rides had little to no waiting. Power Tower here we come! I can't get enough of that ride. Tammy and Rachel love it too so that makes it triple the fun. Rachel brought her friend, Katrina along. Another ride we like a lot is Steel Venum..." steel venom is launching in 3...2...1... Scream!!! " Rachel and I posed for our annual caricature drawings . I think this is the 3rd year we've done this. We all thought hers was the best...very cute. While we were there I had a guy come up to me and ask me if my name was Kevin. I knew right away who it was: Frank Cob
Post a Comment
Read more
More posts